Home  ❭  News   ❭   You Are Paying Rep. Lance Harris To Lobby For Himself!

You Are Paying Rep. Lance Harris To Lobby For Himself! 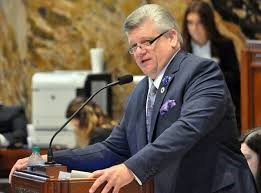 Rep. Lance Harris, R-Alexandria, filed two bills in the 2018 Legislative session that would have benefited his own gas stations by preventing competition from charging less.

You have heard about the Washington Swamp. As bad as that Swamp is, the stuff that goes on in the Louisiana Capitol Swamp isn't even allowed in Washington. Current state law allows legislators to lobby for their own businesses by proposing and supporting legislation that benefits their business.

Legislator-Lobbyist Lance proposed a bill that would have resulted in a four cent cent per gallon increase in gas prices across Louisiana. Why? Lance Harris is a gas retailer and would personally benefit. Special tax exemptions Lance and others give their friends increase the tax burden on hard working families.