Home  ❭  News   ❭   It Could Happen To Your Child Or Grandchild

It Could Happen To Your Child Or Grandchild

"It could happen to your child or grandchild."-Kristian Garic WWL Radio 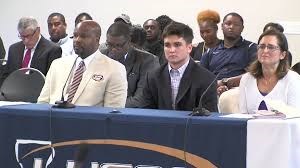 Andrew Robison can play football again and the LHSAA actions that robbed all but one regular season game from him were a disgrace. Andrew Robison has a great family and support system as has been made clear throughout the ordeal. That's why the case is a disgrace and not a tragedy. However, it reveals a history of tragedies and potential of more tragedies that we as Louisianians must end.

Over the years and no doubt at this moment in forgotten communities kids' hopes and dreams of a better life have been and will be destroyed if the LHSAA as we know it does not end.  Since the LHSAA couldn't see their way to do what is right in the light of all the scrutiny in the Robison case, the only real option may be to end its existence by legislative action to ban public schools from participating with our tax dollars. We need to create a new structure to protect student athletes. We cannot continue to put our young people's lives in the hands of an unaccountable organization that in recent years was found to spend $51,000 in a single year on cigars.

We can't even begin to find enough praise for the efforts of WWL's Kristian Garic, Zach Strief, Bobby Hebert, former Congressman Henson Moore, and pro bono attorney David Moyer of Luling. We can not thank you enough for making the calls and emails that we asked you to make that put pressure on LHSAA they have not seen before. The fight is just beginning. The Robison family must pursue all the damages available to them in court. This process will further expose the LHSAA. Our interviews with those familiar with LHSAA operations and the loss of employment by Drew Robison that led to the families move can now see the light of day. The Keystone Cops of the LHSAA will now investigate Vandebilt, the school whose allegations initiated the whole affair, but the same Keystone Cops responsible for the Robison case are not an organization that even has a legitimate role in our children's lives. LHSAA as it now exists needs to be eliminated, that is clear. It may not seem a priority to some, but consider that forgotten kid in a single parent home whose life is being irreparably harmed, who does not have Andrew's support system. Together in the next legislative session, we must end the disgrace of the LHSAA as it currently exists. We appreciate Hahnville High's statement that they intend to offer proposals to prevent a similar situation from happening at the next LHSAA convention. The truth is that LHSAA is not capable of reforming itself. For the sake of the children, we the people through our elected representatives must now make sure something completely different exists for our children.  For case details see this link: