Let's Dedicate A Kathleen Blanco Plaza at The Superdome Now 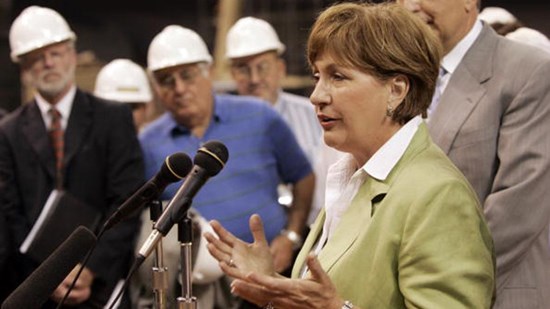 Every time the Saints block a punt, fans who saw it are reminded of the great Steve Gleason block at the first Superdome game following Katrina. Nobody questions that rebuilding the Superdome was the right decision now. In 2006, many Republicans and Democrats launched heavy criticism against Governor Blanco for making it a top priority. Showing the same strength she has displayed recently fighting what she describes as "the monster" of cancer attacking her, she stood strong. In my opinion, she saved New Orleans as a significant city in American life. So many things were a priority in those days as the very existence of New Orleans was questioned. She received relentless criticism for her focus on a stadium when so many other needs existed. Kathleen Blanco displayed leadership and a vision for the future that was the real key in not only maintaining an NFL franchise but creating a credible post Katrina commercial future for New Orleans. The Dome became the symbol of New Orleans' renewal and strength as a culture and community. Governor Blanco used her authority to accelerate the rebuilding process based on revenue guarantees she secured. She created a momentum of recovery that changed the narrative from "will New Orleans will survive" to "what will the recovery become?"

"I will tell you, after we opened that Dome back up and after that first amazing night, the apologies started rolling in," Blanco told ESPN.  "It just had that energizing effect. There was so much elation and so much energy in the streets."

I was intimately involved in recovery operations in New Orleans following Katrina. It's largely forgotten now, but without Kathleen Blanco the Superdome would not have returned to service in 2006. Without that event, the commercial life of New Orleans and our state would have only been a fraction of what it has been in the past twelve years. Now is the time, without delay, to honor Kathleen Blanco.

Governor Blanco told a luncheon last Wednesday that the Cancer she is fighting has progressed. She is optimistic for great days ahead but there is "no escape from what is down the road." We join the call of Governor John Bel Edwards for "all Louisianians to join their prayers to ours for Governor Blanco, Coach, and the entire family, so that in this very difficult and trying time they will experience peace and comfort that surpasses all human understanding." Nothing will be treasured more by Governor Blanco than that, for she is a woman who lives a life a faith first. I propose we follow our prayers with immediate action. Let us join together and immediately name an exterior entrance plaza to the Superdome with the title Kathleen Blanco Plaza.

John Mathis directed the largest EPA remediation project following Hurricane Katrina. He has served as COO of several industrial and medical companies in the Gulf South. John has managed successful political efforts across America including a recent effort on behalf of Congressman Elect Dan Crenshaw in Texas where they were outspent 40 to 1.