The latest of the numerous King Alexander caused scandals at LSU hit the news today in the form of a report from the Legislative Auditor. Just the facts presented in the audit are certainly disturbing enough to immediately bring an end to the tenure of King Alexander and Dan Layzell at LSU. Unfortunately our independent investigation reveals much more, much worse, and more telling information than the audit. We have literally received thousands of emails, texts, and calls asking us how and why King Alexander has not been replaced.  Unfortunately in government there are always many who are invested in and even profit from the status quo. Those relationships are often unknown but often explain the baffling questions taxpayers on the outside have.

Among the things not included in the report of the Legislative Auditor are the following:

A search of public records reveals that LSU Board of Supervisors member and Chairman of the Healthcare and Medical Education Committee Robert Yarborough was also on the board of the nonprofit known as #LaHIT that is the subject of the audit. The daughter of LSU Board of Supervisors member James Moore also was on the #LaHIT board.  We will have more on this later...  Here is the document filed with the IRS that shows this:

Click this link for the full form: #LaHIT Involved LSU Board Member And Relative 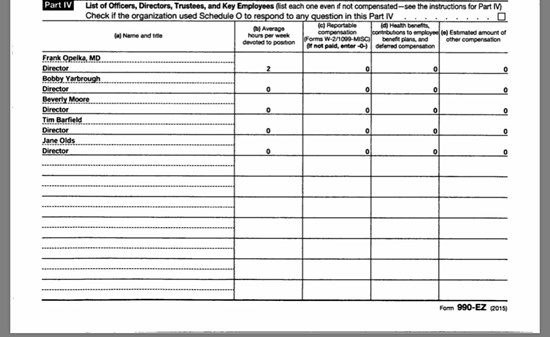 In fact, the next item from the June 19, 2015 LSU Board of Supervisors meeting shows that the item dealing with #LaHIT, involving board members Yarborough and Moore, was deleted at the last minute before that meeting started. 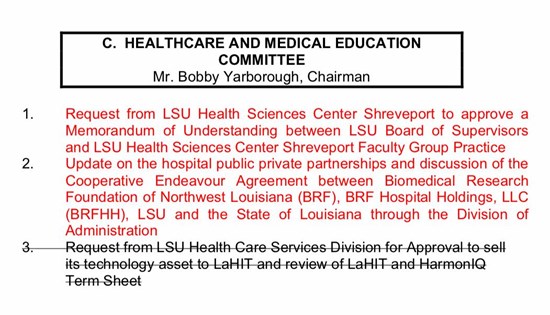 Additionally, while the statement released today on behalf of King Alexander attempts to make former LSU employee Frank Opelka the fall guy for Alexander, the reality is that King Alexander signed off on the licensing agreements and contracts.

We are compiling the many additional facts from our independent investigation to share with the taxpayers who own LSU, the Board of Supervisors, and other officials as may be needed in the days ahead. Just as with the recent change in leadership at LSU Athletics, we believe that officials will take appropriate action as soon as possible and bring needed new leadership to LSU. For those of you that love LSU it's time to sound off:  Click this link to  Contact Your LSU Board Of Supervisors